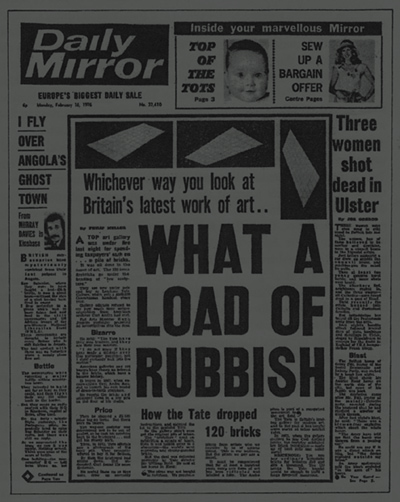 Minimal Art, and then Minimalist Architecture, correct? Minimalist Architecture provides an idea of the derivative character of the thing, correct?
And Minimalism is the generic combination of the two (including some depressive fashion design and something else we’ve already forgetten about)?
Please, historians, can you give us a hand? We know we normally don’t care. We apologize.
Can you help us?

“Formal art is essentially rational”, wrote Sol LeWitt in a scary piece of literature known as “Sentences on Conceptual Art” (1969) that probably offers the clearest expression of the Minimalist agenda.
Formal art is, indeed, essentially rational, yet this characteristic – one that must be the starting point of the development of any conscious artistic practice – was, according to LeWitt, a limitation: given that “(2) Rational judgements repeat rational judgements”, then only “(3) Irrational judgements lead to new experience”. The text then continues with the sophistication of Pol Pot: “(5) Irrational thoughts should be followed absolutely and logically”; “(6) If the artist changes his mind midway through the execution of the piece he compromises the result and repeats past results” and “(28) Once the idea of the piece is established in the artist’s mind and the nal form is decided, the process is carried out blindly.”

• The Consequences of Minimalism •

By promoting attitude (i.e., intention) over form, Minimalism inaugurated the terrifying seriousness of contemporary art.
In fact, if what matters is the artist’s intention, if what is exhibited is intentions, then these intentions cannot avoid being serious. If form is lost, then humour is lost as well. If discipline is lost, then jokes are no longer possible, because without discipline all jokes become insults. It is not possible to laugh at someone’s intentions.

Donald Judd’s Architecture nds its place on the shelves of the architecture section in architecture libraries. This is wrong. And yet this sculpture book is somehow interesting, as it shows sculptural works on the scale of architecture and pictures of Judd’s of ce, the battered sheds where he used to work and exhibit his and his friends’ artworks as well as schematic plans of houses and furniture – here his abstract pieces become melancholically useful. The pictures in the book reveal the usual limits of architecture made by artists, even though they do not show real architectural works (as in the cases of Eliasson or Ai Wei Wei). It seems as if Judd came to the amazing conclusion that architecture is not perfect, that it has seams and joints and can be dirty.

Minimalism clearly preferred sculpture over painting. As the most physical, rhetorical and a-critical of the traditional visual arts, sculpture perfectly satised Minimalism’s anti-intellectualism, anti-realism and anti-rationalism.
Progress for contemporary architecture cannot be anything but a refusal of sculpture and a return to painting, a refusal of the stupidity of sculpture and an aspiration to the intelligence of painting. Once again: Bramante vs. Michelangelo, Vignola vs. Palladio, Koolhaas vs. Gehry.

• A Phenomenology of Geppetto •

Geppetto is the father of Pinocchio. He is a carpenter. After leaving his father at the beginning of the story (Chapter IX), Pinocchio nds him again in Chapter XXXV. Pinocchio is swallowed by the Terrible Dog sh and inside its belly he nds Geppetto, who had been swallowed by the Dog sh two years earlier. Geppetto had survived re-using the supplies of a ship eaten by the creature. For two years he had not tried to escape. So what did he make in this period of captivity? Inside the belly of the Dogfish, Geppetto probably recreated the world by starting from the relics of it available to him there. He did not care that the world already existed; he simply went about his carpenter business, making a home in the belly of the Dogfish just as he had in his Tuscan village.
At the end of the story when Geppetto has returned home, he returns to carving his favourite decorations in wood. If something is clear from this sequence of events, it is that Geppetto does not learn anything from Pinocchio’s story: “He was once more Mastro Geppetto, the wood carver, hard at work on a lovely picture frame, decorating it with owers and leaves, and heads of animals.”

Making punk rock records is de nitely a case where more “work” does not imply a better end result.
(Steve Albini in a letter to Nirvana, 1992)

Mies did not particularly like to write. He did not care for it much, and there’s no reason to dislike him for it. This lack of texts – which is nevertheless a relative one – slowly generated a picture of Mies as a silent, ascetic master (which seems to be a quite dubious characterization considering the man’s biography). Over time, this silence was occupied and arti cially expanded by architectural critics – they were Marxists, weren’t they? – who were curiously committed to turning Mies into some sort of New Age guru. Why?

“I cannot visualize Heidegger other than sitting on the bench outside his Black Forest house, alongside his wife, who all her life totally dominated him and who knitted all his socks and crocheted all his caps and baked all his bread and wove all his bedlinen and who even cobbled up his sandals for him. . . . Heidegger is the petit bourgeois of German philosophy, the man who has placed on German philosophy his kitschy night-cap, that kitschy black night-cap which Heidegger always wore, on all occasions. Heidegger is the carpet-slipper and night-cap philosopher of the Germans, nothing else. . . . When you come to a petit-bourgeois or even an aristocratic petit-bourgeois party, you are very often served Heidegger even before the hors-d’oeuvre, you have not even taken off your overcoat and already you are being offered a piece of Heidegger, you have not even sat down and already the lady of the house has brought Heidegger in with the sherry on a silver salver . . . . [E]verything about Heidegger has always been repulsive to me, not only the night-cap on his head and his homespun winter long-johns above the stove which he himself had lit at Todtnauberg, not only his Black Forest walking stick which he himself had whittled, in fact his entire hand-whittled Black Forest philosophy, everything about that tragicomical man has always been repulsive to me, has always profoundly repulsed me whenever I even thought of it. . . . I have seen a series of photographs which a supremely talented woman photographer made of Heidegger, who in all of them looked like a retired bloated staff of cer. . . . In these photographs Heidegger is just climbing out of bed, or Heidegger is climbing into bed, or Heidegger is sleeping, or waking up. Putting on his underpants. Pulling on his socks. Taking a nip of grapejuice. Stepping out of his log cabin and looking towards the horizon. Whittling away at his stick. Putting on his cap. Taking off his cap. Holding his cap in his hands. Opening out his legs. Raising his head. Lowering his head. Putting his right hand in his wife’s left hand while his wife is putting her left hand in his right hand. Walking in front of the house. Walking at the back of his house. Walking towards his house. Walking away from his house.”

• Because Grey Is a Very Sad Colour •

At the end of the 1960s Ettore Sottsass designed a collection of objects for Poltronova called mobili grigi (grey furniture), including chairs, a table, a sofa, a mirror, a cabinet and lights to furnish an entire home. These objects took on architectural forms such as pyramids, ziggurats and temples, and were somehow related to the art deco of the 1920s. In an attempt to work against the rules of marketing, Sottsass decided to produce objects that were entirely grey, made of shiny breglass plastics and illuminated by ghostly neon lights. Once a home was completely furnished, in the anonymous space of the resulting dwelling “the inhabitant will feel himself completely isolated from everything which is outside the room, like being in Benares in the boiling red Monkey Temple”.

• Alteration to a Suburban House •

“Dan Graham’s unrealized project Alteration to a Suburban House (1978) generates a hallucinatory, almost Expressionist image by means of a historical critique of conceptual art. In this work, conceptualism is the discourse which fuses together three of the most resonant architectural tropes of this century (the glass skyscraper, the glass house and the suburban tract house) into a monumental expression of apocalypse and historical tragedy.”
Jeff Wall, “Dan Graham’s Kammerspiel” (1982)

Why don’t you consider Tadao Ando an interesting architect? Ando does not write, except for the short and childish texts relegated to the end of his own books, and he was crowned the King of Minimalism in the 1990s. All of this somehow ruined his reputation. These days, Ando is just a cliché: Ando never studied architecture; Ando had a boxing career; concrete walls with little circular holes; curved concrete walls with holes; crosses of light behind the altars of Catholic churches.
Maybe Ando simply lacks a proper narrative because somehow, in the end, Ando is sometimes good.

If we forget about the philistine atmosphere of Minimalist Architecture for a moment, it is dif cult to deny that it generated a good bunch of solutions (corners, pavements, window frames) that still de ne the basic vocabulary of architects’ everyday activity. (To be honest, to a certain extent we are all “Minimalist architects”, for as much as we would like to claim that we like Bo ll more than Max Bill, this is not true: we copy details from Claus en Kaan, not from R.A.M. Stern.) The ultimate slickness of mainstream Minimalist Architecture somehow coincides with the extreme polish of the mainstream International Style of the 1950s, and we all like that: Jacobsen, Bunshaft, Saarinen, Emery Roth & Sons. At their best, the two seem to coincide: is the Chipper eld of today what SOM was in the 1950s?

The early work of Herzog & de Meuron focused obsessively on the materiality of the perimeter, starting from the implicit assumption that any possible space for inventiveness at the level of the plan had been eroded by the combined in uence of regulations and client’s requirements. The results were groundbreaking and proposed a viable means of escaping from both the late pastiche of postmodernism and the barrenness of hardcore Rationalism. The tricks employed to make the box interesting were quite ingenious, but not as challenging as the nihilistic agenda behind the entire operation. Indeed, Herzog & de Meuron looked like they wanted to show that the entire scope of architecture could be reduced to the problem of storage (and indeed, museums  are storage, housing is storage, schools are storage, hospitals are storage, cemeteries are storage . . . ). In a way, here we are lacking a bit of commitment to this glorious and foolish endeavour. It probably would have been possible to accumulate enough evidence to conclude that, indeed, everything is storage in the end.

WHAT'S WRONG WITH THE PRIMITIVE HUT?